Skip to content
“It’s like a Corolla Altis,” is the metaphor he offers and “boring but desirable” is the interpretation I offer."

It would be easy, and not wrong, to describe Cinnamon College as the heart of USP. In fact, 18 College Ave East is imprinted so deeply in my mind and Grab app that I might never forget it.

But is Cinnamon really home? And, what is Home to USPeeps?

I was curious about how my fellow USPeeps made Cinnamon their own and so I asked this question to some fellow Year 1s, having heard talk of their well-decorated rooms.

To Gordon, Year 1 Psychology student, the room is a sanctuary for relaxation and unwinding after a long day of work. His room echoes a moody, minimalist look with clean lines and no mess. The initial layout was “boring” so he shifted the furniture for “a different kind of energy and vibe”.

He also said that if the room looks good, then he will feel good. A testament to the close relationship between space and person most of us can relate to. Inspired by his actual home where he lives in, Gordon tries to make this place as close to what Home could be like. Gordon says, “People are what truly make a place Home for me. My friends here make Cinnamon homely.”

“It’s like a Corolla Altis,” is the metaphor he offers and “boring but desirable” is the interpretation I offer.

Samuel, Year 1 Mech Engineering student, is the unassuming owner of (dare I say?) the best room in Cinnamon. Besides the mind-blowing (to this writer) $50 wooden Muji trash bin and equally expensive wooden Muji tissue holder, Samuel’s room exudes a composed tranquility. The table set-up includes fountain ink, a glass tea set and diffuser. The room has ambient lighting and jazz music playing faintly, everything needed to set the mood and impress any visitor.

When I asked Samuel why did he decorate his room this way, he simply said “Because I cannot stand it being any other way” and he insists that “it is not decorated per se”. It is no surprise that he draws his inspiration from the entirety of Muji and wood-inspired minimalism, which he is aware “sounds so pretentious” with a laugh.

More seriously, Samuel treats his room purely as function and wishes it to be non-offensive.

“It’s like a Corolla Altis,” is the metaphor he offers and “boring but desirable” is the interpretation I offer.

Cinnamon is comfortable to him, but that’s insufficient to call it Home. That would be like a communal toilet that is functional but yet your’re not totally at ease with using. I think Samuel’s room can be compactly understood as the sense of control over this space that is entirely his own.

I guess Home does embody several layers of meaning to people. On one hand, it is about the aesthetics and how you feel when you step into a space. On a deeper level, it is about belonging, a sense that cannot be recreated with trivial home decor. Both meanings are intrinsically emotional, on how the space interacts and affects a person’s mood and identity. I curiously noted that our rooms in Cinnamon are sometimes simultaneously private and public spaces. Personal enough to display our own flair and quirks yet it isn’t uncommon to invite people over, to have someone witness that same display.

The intersection between spaces and people has been studied for the longest time. There even exists a journal detailing spaces, emotions and society. I guess, the relationship between USP residents and Cinnamon College is uniquely ours to make out and confer meaning upon. 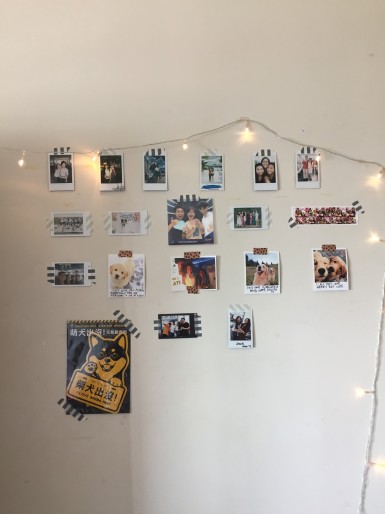