Skip to content
Dozens of students gathered in Chatterbox for the latest edition of The Sessions, titled ‘Brexit and Beyond’, to learn about the vote and its implications, seven months after the fateful 23 June 2016 British referendum on the country’s continued European Union (EU) membership.

Dozens of students gathered in Chatterbox for the latest edition of The Sessions, titled ‘Brexit and Beyond’, to learn about the vote and its implications, seven months after the fateful 23 June 2016 British referendum on the country’s continued European Union (EU) membership.

Mrs McKenzie summarised the circumstances surrounding the 23 Jun 2016 UK referendum on its EU membership before the floor was opened to questions.

The stark divisions between the voting patterns of different age-, race-, education- and region-based demographic groups was raised. The data, revealed by Lord Ashcroft’s opinion polling and surveys, is widely regarded. However, it was also noted that there exists complexity that could not be captured by polls – not all voters fell neatly into either Remain or Leave based on their identities.

It was further elaborated that the debate leading up to the referendum bundled many issues into a single question on the ballot slip, and had been influenced by emotions and misleading claims by politicians. (Like the infamous claim paraded on the side of a bus that 350 million pounds weekly that could be spent on the National Health Service if the UK no longer had to pay EU membership dues.)

Moreover, the result of the vote threw up some surprises, including Wales voting overall in favour of leaving, despite Welsh areas being amongst the most well-funded by the EU in the UK.

A reasonably optimistic note on the subject was stricken up, pointing out that Britain’s economy continued to grow last quarter at rates comparable to its European neighbours, contrary to fears of a recession.

Yet, after fielding some rather difficult questions, it appeared to me that this might have been an attempt at defending the indefensible.

A British student in the audience asked about the ramifications of Brexit on the pensions and healthcare access of retired Britons living on the Continent. Questions also surfaced regarding British PM Theresa May’s 18 January declaration that ‘no deal for Britain is better than a bad deal for Britain’, and how UK Foreign Secretary Boris Johnson’s offensive remarks to other EU leaders risked jeopardising the outcome of Brexit talks for the UK before they begin.

I received a satisfactory diplomatic answer to my query: ‘How many friends does the UK have in the EU?’ The UK’s important contributions to the EU in the past was noted, as was the belief that the UK would be able to reach a deal with the other EU states, and that the UK was on amicable terms with them.

As a counterpoint, it was pointed out that although countries like Denmark might be more sympathetic to the UK in talks, the political maxim that ‘there are no permanent friends, only permanent interests’ from countries’ perspectives when it came to international relations may be a relevant concern.

This was followed by a discussion of the currents of populism and protectionism, and ‘democratic regression’ in the West. The exchange arose in response to questions from audience members who apparently saw Brexit as a symptom of greater trends, rather than a major problem in itself.

Somewhat regrettably, the audience’s questions did not seem to probe the speakers’ thoughts much on their predictions for the future of the UK or the EU, or the likely terms of the final deal.

Then again, no one seems to have much of a clue right now as to what will happen next, not least British politicians, who nonetheless largely voted on 1 February to give PM May in-principle permission to trigger the Brexit process formally, while they would get to read the UK government’s white paper outlining its plans for Brexit talks only the day after.

The opinions expressed in this article are the author’s own and do not necessarily reflect the view of The Cinnamon Roll or its editors. 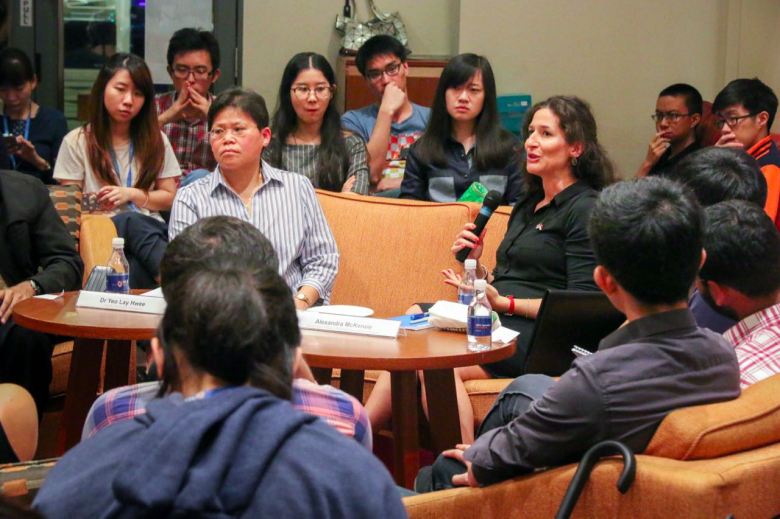 Some additional photos from the night.