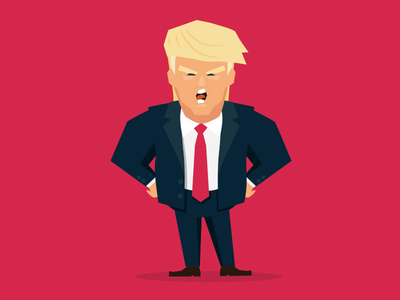 For those who have been blessed enough not to know who had won last year’s election, I shan’t burst your bubble of ignorant bliss. And do stop reading now if you intend to stay in it.

The United States is that one nation in the entire world that commands global attention. From music to movies to television, no one can keep their eyes off them.

I’m no political pundit. I know as much about Congress, the Senate, and the two dominant parties as any other person. Which is to say, I understand very little. The intrigues and machinations of US politics remain a shroud to me, but I do know that the presidency of the United States is an important seat. It is one that enables any man from any background to become the most important figure in international politics. I know what being the leader of the free world means, and I know the weight behind that title.

For those who have been blessed enough not to know who had won last year’s election, I shan’t burst your bubble of ignorant bliss. And do stop reading now if you intend to stay in it.

But for those who do, you’d know that Trump had won.

That one. The man who had professed to “grab” women by their “pussies” because you can do anything to women when you’re powerful. The man who vowed to build an ugly draconian wall to prevent illegal immigrants from crossing into the US and promised to somehow make Mexico pay for it – they’re not going to. The man who wants to make NATO pay for US military support. That’s the man that the US had elected to be their champion, their representative to treat with other foreign leaders and speak in their name.

I’m not going to turn this into a sex thing. As qualified and measured as she is, Hillary Clinton is startlingly impersonable. I had preferred her to Bernie Sanders for her experience and not her rhetoric. But in politics where statecraft has often been likened to stagecraft, what is perceived is more important than the reality. Clinton did not have the charisma to win. And for that, I feel deeply sorry.

A Clinton win for me would have spelled many things. I had hoped for increased US interest in the South China Sea. Clinton has more experience in foreign policy than Obama. With her in power, perhaps the promise to “pivot” or “rebalance” to Asia would have been made good. I liked what she was doing for the minorities, for sexual and gender equality. Clinton has many faults and I will not presume that I know enough to defend her, but I honestly thought that between the two candidates, she was the better one. And perhaps selfishly, I thought that American and Singaporean interests would align more closely with her in the office.

The US is hardly a paragon of virtue – many disastrous foreign interventions come to mind. But as an entity, I like what they strove for. It is heady idealism at its best: the belief that humanity can one day be better than what we are. They are still very much the icon of modernity, of progress and success. More realistically, America is also strong, and Singapore needs strong friends.

Yet, I wonder if we’re witnessing America’s slow fall from eminence. I don’t buy into the idea of American exceptionalism. Greater empires and powers have fallen to dust and America will not be any different. Whether Trump will signal the giant’s impending wane is hard to tell.

It depends on the orange man who will take the Oval Office on 20th January now.

The man was voted in on his ticket for change and despite all the misgivings I have, there will be change, so I can only hope that it will be a good one. Unity as a nation will be difficult –  especially with the divisive narrative that Trump had espoused before – but they may tide through it yet. I pray that Trump will have the fortitude and temperance to wield his power gracefully. I pray that he can stabilise fractious discontent domestically. I pray that he can shape a stable international system.

There’s an underlying desperation in my words.

As it is, when I read about Singapore’s foreign policy woes today, I cannot help but wonder if we might have overstepped our inclination towards the West. As much as we would like to spearhead developments in Southeast Asia, rapidly cooling Sino-Singapore relations and their increasingly evident consequences means that we can ill-afford a misstep. And if Trump proves to be ambivalent towards any overtures too, what do we do then?

Because if Trump really is the harbinger of a radical shift in global power, it means more to the rest of us than just laughing at the newfound American fool. Already, global players are shifting to take advantage of America’s momentary flagging of power. If Trump proves himself to be as incompetent as the Left makes him out to be, there can only be more grief for the American-led international system that Singapore is very much a part of.