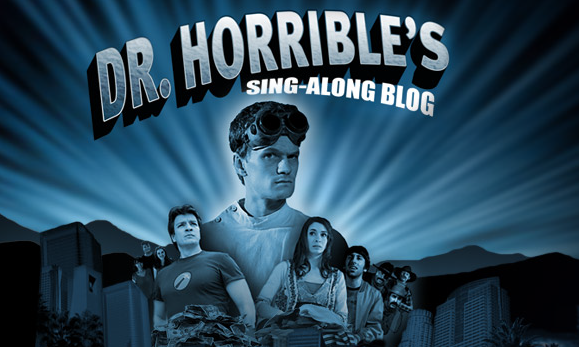 The 2007–2008 Writers Guild strike may have shut down a lot of creative work in its time, but it did result in at least one masterpiece: Joss Whedon’s musical tragicomedy Dr. Horrible’s Sing-Along Blog. This miniseries was produced despite the strike by being released on the Internet and financed out of Whedon’s own pocket. It tells the story of the eponymous Dr. Horrible (played by Neil Patrick Harris), a wannabe supervillain (of the evil genius variety, naturally) striving to be accepted into the Evil League of Evil and win the heart of his love interest, Penny (Felicia Day). Along the way, his efforts on both fronts are stymied by superhero and arch-nemesis, Captain Hammer (Nathan Fillion), who not only interferes with Dr. Horrible’s heists but also starts dating Penny.

The show’s main strength lies in its density – in how it squeezes in so much in so little time. Despite being a mere 42 minutes long, Dr. Horrible’s Sing-Along Blog features no fewer than 12 songs, possesses plenty of humour, and displays copious quantities of drama and character development. This is a miniseries that makes every second count, and it does so in a manner both casual and comedic so that viewers are not overwhelmed.

Yet, the show’s light-hearted tone belies heavier themes. The short series is a clever deconstruction of the superhero genre, and this becomes apparent within minutes of pressing the play button. In Dr. Horrible’s Sing-Along Blog, the line between heroism and villainy, good and evil, black and white, is constantly blurred. The series tells a story not of contrasts, but of grey versus grey morality. That much should be obvious considering that the show’s title character is an anti-villain protagonist, with a special emphasis on the anti. Dr. Horrible is the sort of villain who has no compunctions about stealing but is morally repulsed by murder, the sort of villain who shamelessly recounts his latest crimes on his video blog but is painfully shy, and the sort of villain who hatches countless hare-brained heists but is so utterly ineffectual that one cannot help but find his pitiful attempts at criminality almost endearing. The man can’t even manage an evil laugh, for goodness’ sake!

Meanwhile, Dr. Horrible’s counterpart, the supposed “hero” antagonist Captain Hammer, is smug, obnoxious, manipulative and a bully – the jerk jock to Dr. Horrible’s sympathetic nerd. This is apparent right from Captain Hammer’s first appearance, when he intercepts a van with precious cargo hijacked by Dr. Horrible via remote control by jumping on top of it. He takes several moments to vainly prance and preen and pose atop the moving vehicle, before destroying Dr. Horrible’s control device and then hopping off the van to flirt with a female bystander, leaving the now out-of-control vehicle to careen dangerously through the streets. Past this already-questionable first impression, his behaviour only becomes increasingly off-putting. Captain Hammer proceeds to beat Dr. Horrible up, and subsequently dates and sleeps with the latter’s love interest, Penny, for the sole purpose of spiting him.

This all sets the stage for an escalated conflict between Dr. Horrible and Captain Hammer which drives the plot effectively. However, perhaps the show’s greatest triumph as an intelligent deconstruction of the genre is that it doesn’t solely focus on the tensions between a sympathetic villain and an unscrupulous hero. The series also offers commentary on an altogether different dynamic – that of between the superhero and the common man. Specifically, the series explores the unhealthy obsession people have with superheroes, which blinds them to both Captain Hammer’s glaring character flaws and the significant contributions of normal, everyday heroes – or, more accurately, an everyday heroine. It is not the anti-villain Dr. Horrible, not the ”superhero” Hammer, not the general populace of this fictional universe, but Penny who is the one unambiguously good character in the show. She is the one who spends hours on the streets petitioning to convert a condemned building into a homeless shelter. She is the one who cheers up Dr. Horrible (as his alter ego, Billy) after he’s had his heart, spirit and even body broken (“Captain Hammer threw a car at my head!”). And she is the one who eventually sees through Captain Hammer’s ostensibly heroic facade, rising above those who respect him to the point of hero worship.

Indeed, much of the tragedy in this tragicomedy stems from how all of Penny’s actions don’t matter in the slightest. Penny can’t procure enough signatures for her petition because people were just too apathetic; her cause only succeeds after Captain Hammer surreptitiously threatens the mayor to pass the bill (“Apparently the only signature he needed was my fist. But with a pen in it. That I was signing with.”) – which he only does to get Penny to sleep with him. Penny’s warm words of comfort to her “Billy buddy” fall on deaf ears, and the latter is driven by rage towards Captain Hammer to embrace killing and construct a death ray. And, right until the very end, Penny remains the only person besides Dr. Horrible who sees Captain Hammer as the petty, prideful, self-centred man he truly is.

Viewers hoping to see some happy ending, some vindication for the pure-hearted Penny and the beleaguered Dr. Horrible should be prepared for disappointment – or, at the very least, confusion. The musical’s last piece serves as a neat encapsulation of the series as a whole: a triumphant victory song sung to the tune of a dirge. Though the story doesn’t conclude with some gimmicky, cop-out ending like a cliff-hanger, Dr. Horrible’s Sing-Along Blog leaves the audience wondering whether the hero really did win long after the credits play. How can they arrive at an answer, when there is so much ambiguity over who the real hero is and what the win conditions are? One thing can be said for certain, however: Dr. Horrible’s Sing-Along Blog may be equal parts hilarity and horribleness, but it is all masterful storytelling.