It was dark and claustrophobic. With the windows shut and few lights glowing, the main source of light my in-flight entertainment monitor on which I had watched 5 movies, I had lost track of time. Sleeping intermittently, I had not showered since I left my home late last night. How long has it been? It had been 7am at the stopover in Dubai and I was due 2:30pm at JFK airport in New York. Seven hours have passed, but we weren’t landing anytime soon.

“Please return to your seats and fasten your seatbelts. We’ll be landing in JFK shortly.”

The plane taxied and landed. It took about an hour before I could even walk off the Airbus A380. But as I was walking to the immigration counter, it hit me that I had finally landed in America, a land I had dreamed of visiting since I was a kid. Around me were many people from around the world that looked like hopeful immigrants into the Land of the Free.

It was about an hour later before I cleared Immigrations and Customs.

“I have pineapple tarts.”

Emerging from Arrivals, I was so relieved to catch sight of Justin and Jin Hui, who had come by another flight. We took a SuperShuttle to Manhattan – it was only two hours later before we entered the Big Apple.

I leaned back in my chair and gazed upwards at the skyscrapers. I was in the most exciting city in the world. I’m here.

Cleaning up at the Airbnb house we had booked, we went out for dinner with John Leo Caines, who came to meet us from his exchange at Yale, which he has been at for a semester already.

We wake up after a rest punctuated by the noise of honking and partiers in the city that never sleeps. After a lavish breakfast which I spent more money on than I was used to (it’s your first morning in America, give yourself a treat, I reasoned) we went to find a Bank of America branch to start a bank account. People were walking, walking, everywhere, and it felt like everyone had someplace important to go, and important things were happening in this city. Just standing in the middle of it, I could feel myself being carried along the city’s pulse.

Later, we headed to Times Square. Other than the vivid billboard advertisements, I didn’t see what was so great about it. I also overpaid a tip to a roadside comedy show ticket seller. I later learnt that you’re not supposed to tip roadside sellers in the first place.

After that, we headed to Central Park. it was brown and barren; the trees were leafless, but there were still squirrels bounding about everywhere. 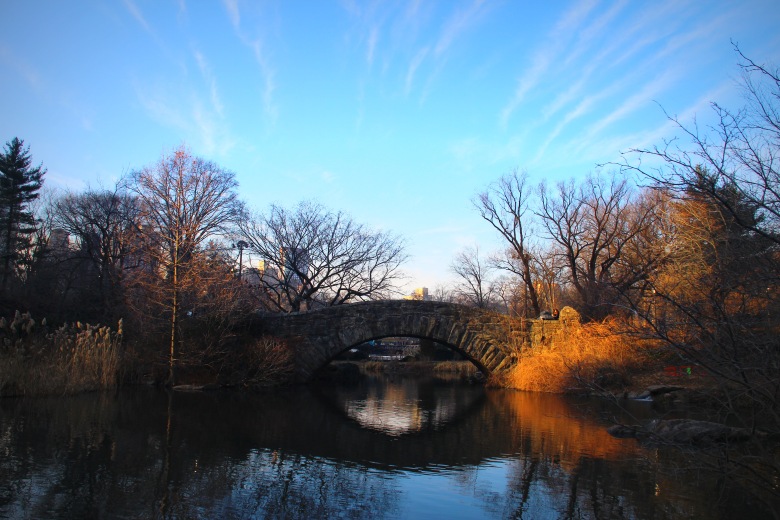 We exited from the side of Central Park and made our way to the Metropolitan Museum of Art. On the way, we were harassed by some ‘DJs’ attempting to give away their mixes. Assuming the best of Americans at first, I shook their hand, and five minutes later, my friends and I were 15 dollars poorer from a ‘tip tip’. There were more of these DJs walking up and down along Central Park attempting to pull a fast one on other tourists like ourselves. We ignored subsequent ones after that no matter how much they called after us.

The Met was fairly interesting, but jetlag was hitting me and we left after a couple of hours to rest in our accommodation.

We got up for breakfast at a nearby diner, and I decided to get pancakes. When we emerged from the diner at the end of our meal, we found snow falling relentlessly from the sky. It was beautiful, and I managed to catch a snowflake on my glove. But the snow melted upon touching the pavement; it was warm by winter standards, hovering at about zero degrees Celsius.

We went back to our hotel and booked out with our backpacks and suitcases, dragging them heavy to the Port Authority Bus Terminal, with barely any time to catch lunch before our bus ride. We had planned to try Five Guys before leaving, but instead we had to settle with an oily jumbo pizza slice at the Port Authority Bus Terminal. Soon, it was time to board, and sitting comfortably in the Wi-Fi enabled Peter Pan bus,we gazed out of the window as the bus pulled out of the terminal, made its way out of Manhattan island, and began a long drive out of the city of New York, and towards Storrs.