“I wish everyone would start to imagine more, ask more, demand more from the physical spaces that we have, and see the potential in them.”

While many of us saunter through the corridors of the RC, learn lobes and lounges without a second thought, such is not the case for members of the USP Space Initiative working group. I had the privilege of meeting with Varun (Year 3 Engineering + USP, Vice President of the 13th MC) to find out more about what this initiative is. 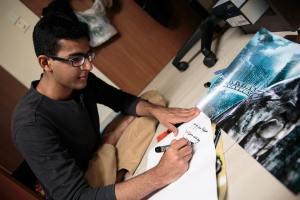 What started as a group of six ad hoc volunteers who wanted to redefine spaces in USP has now become one that has seen changes come to pass. “I guess why we want to do this because we’ve been in the RC for quite a long time and we haven’t really done much with the spaces. The theme rooms not really themed, the lounges are quite a mess, generic, and unflavoured, with disgusting coloured furniture… that’s how this started.” RC residents will probably have observed some of the changes that have taken place – more prominently perhaps would be the new beanbags in Chatter, the shifting of furniture in the lobby, and the massive cleanups and rearrangements in the Theme Rooms. Varun did note, however, that things took a while to pick up partially because the team is not within any formal USP structure.

However, the group has been busy with many proposals underway, and hopes that summer will be the time to make changes – specifically, the two theme rooms, chatterbox, and the lobby. Plans include getting new furniture like carpets, improving lighting, having more places like the corner opposite the piano in the lobby, and hope to do what they can even though they “can’t remove pillars”, quipped Varun. The team also hopes to obtain permission to do something outside the management office such as having more couches, coffee tables and lamps.

Most plans don’t come without challenges, and one of the key challenges Varun discerned is the degree of ownership over the space in USP, with some efforts having been in vain due to objections by the OHS. However, he believes that the greater challenge lies in helping the USP community feel like the space belongs to them, and sees greater involvement and participation as a key goal. “Changes would be more effective if 600 students who wanted something rallied together and collectively proposed something.” He attributes that to the possibility that “we haven’t seen what it could be…how it could be like in USP. We haven’t reached the point where people will care about corridors or lounges to think about how to improve them”.

He added: “OHS doesn’t see it that way, it sees that we are tenants, and they are leasing out the building to us, so we have mostly been complying because no one has cared about lobby in that way. But we are trying to change things slowly and letting OHS know that this is our lobby.”

Why spaces then? Some might ask. Perhaps for many of us, spaces are functional, and possess a unidirectional relationship with people, or its inhabitants. However, Varun believes that spaces are important in building culture. “If we take ownership, it can really be defining in how we shape our culture,” he explains. He reminisces about the “old chatterbox at ADM, because that was space for people to bond in, free space that organically became used for many things, to hang out, where a lot of ideas came from…[the current] chatter is not ideal, but we want to turn this place into that in some way, because spaces dictate culture”.

“[It all] comes back to culture. If you create spaces for people to share random ideas, read a book, get some coffee, a lounge kind of space, becomes part of a culture we set here.”

The team feels that there is much potential for the spaces in USP that have been under-utilised. Varun even mooted the idea of a night lounge, a place where people can do things after hours.

“[It all] comes back to culture. If you create spaces for people to share random ideas, read a book, get some coffee, a lounge kind of space, becomes part of a culture we set here,” said Varun.

What culture, and what spaces, do you hope to see in USP?