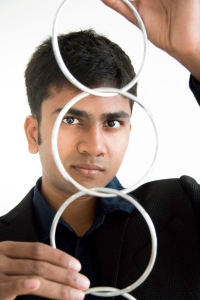 At 13, other boys might have spent their time practicing sports or music, obsessing over computer games or maybe (cough) girls. But for Seenivasan Sre Vinod, (Year 1 Mechanical Enginnering + USP), his secondary 1 year in St. Joseph’s Institution saw him having quite literally a few different tricks up his sleeve. His was the unusual calling of magic.

“It’s a part of me because it was one of the things I discovered I was good at,” he shared. “I wasn’t particularly talented in any other things. Then I realized I like this, I’m becoming better at it, and it was something that set me apart from other people, which I really liked – because my basic principle in life is to be different, to be unique.”

Today, over eight years on, his passion for magic remains as strong as ever. Since his army days, Vinod has been performing at gigs, birthday parties, and for community service (he recently held a show for the elderly at Ren Ci Nursing Home). He’s even had the opportunity to rub shoulders with a friend of American stage magician, Lance Burton, at a go-karting gig. To top it off, he’s emerged the winner of numerous magic competitions, including the ninth edition of 1-Minute Fame, organized by Salaam India Exhibition, where he happily came away $600 richer.

Magic is doubtless an unusual hobby though, and definitely one that most people wouldn’t have come into contact with. As Vinod shares, “If I point to a random guy and ask him how often he’s seen a magician perform up close, [he’d probably say] he’s [only seen magic] at a community event or on TV.” As for Vinod himself, perhaps if not for his secondary 1 Computer Science teacher, Mr. Soo Chan Hua, who used to show magic in class as a way to get students’ attention and conducted some workshops on showmanship, he wouldn’t have started either. “I thought that was very cool and that’s how I first became interested in magic,” he said. After that, he went to his school’s library, found some books on magic and just started picking it up together with some of his friends.

However, what really kept him inspired were his friends, Ramakrishna, who helped him with videography and photography, and Alexander, a Psychology graduate from NUS who set up his own magic company, Meta Illusions. “Alex was the guru guy who gave me a lot of advice,” Vinod shared. Magicians too have been a great source of inspiration: These include renowned magicians like Apollo Robins and James Brown, who he deemed to be “gods of misdirection”, and those who are less well-known such as close-up magician, Wayne Houchin.

Still, picking up the tricks of the trade was by no means a walk in the park. For Vinod, books, DVDs and videos guided his path towards learning the illusions he performs so flawlessly today – “90 per cent of magicians are self-taught,” including himself, he explained. But “magic is a very, very expensive hobby,” he remarked. A single DVD at the time cost around $50-$60 dollars – extremely pricey for a 13-year-old. Luckily, because he was more into impromptu magic (“when I start doing [magic] with borrowed objects from people, their reactions are more powerful,” he noted) props usually came cheap. Vinod can easily amaze using things as simple and ordinary as “coins, rubber bands, cell phones, ez-link and business cards, and sponge balls”, just to name a few. Of course, this is probably due in part to the fact that poker cards got banned in school. “I thought this [was] a sign that I should learn something else, so I learned coin magic and other things,” he said.

Juggling between studies and magic also proved to be a hassle. When he first started and “got intense about it”, his parents got very worried. After all, Vinod used to be a top scorer in primary school, but his grades started dropping once he entered secondary school. He could still recollect with surprising clarity an event when “there was a physics test the next day, and with my right hand, I tried to read my notes and with my left, I was shuffling cards. … You can imagine just how much went into my head!” Thankfully, his parents are now very supportive: “their only concern is that it doesn’t affect my grades, and I’m able to discipline myself.”

In fact, meet Vinod today and you may wonder instead where magic fits in in his current major of Mechanical Engineering, but for him, it’s “not very off”. “Since young, I’ve been interested in science and how things work in a way,” he admitted. “Every magician has that side of how things work, because when you see a trick, you ask how is it done? In both [engineering and magic], there’s a lot of logical thinking involved.”

Being a magician has its own particular set of perks. For one thing, it’s a good ice breaker. “I mean it impresses everyone,” he said. But he was quick to add that he doesn’t do magic to pick up girls – a question, he claimed, “every magician gets asked”. “It’s ultimately up to your own personality and social skills. I mean, you could be a really good magician, or anyone could learn a magic trick and show anyone. But if apart from that, you don’t have any good social skills, if you’re not a good communicator or you’re not an interesting person, then…” Also, with magic, card games also suddenly become all too easy! Though Vinod says he never cheats in card games, his friend, who’s a magician himself did when playing Blackjack with his family and “made quite some money”. Still, his friends never trust him with the deck when they play card games with him. “They would either say ‘Don’t let him shuffle!’, or they would let me shuffle, because they like to see the elegant way I shuffle, then take it [the deck] back and shuffle it one more time,” he laughed. Do beware this trickster though! His favourite act is stealing someone’s watch (while misdirecting them with another illusion) which admittedly “doesn’t work all the time, but when it does, it’s gold.”

You may wonder – with his skills and prowess, can any trick evade this magician’s watchful gaze? Well, surprisingly, that’s a yes. “My favourite illusion is David Copperfield’s flying illusion, [which was in] his staged show,” Vinod said. “Basically, he’ll fly around, and it’s quite a masterpiece, because throughout the whole thing, there’s many convincing [aspects] to show you that there’s no way there’s any string or anything attached to him…I still refuse to put my mind to try and find out how it works, because it’s something really very beautiful and it’s just one of those things you just prefer not to know how its done.”

But if there is anything he really does want in magic, it’s to one day do his own show. “I hope to do a show that’s not ordinary – where you just come, see tricks and it’s over – there must be some sort of intellectual thing to it,” Vinod explained. “Recently, I see a lot of very well-themed, well-thought out acts coming, so it’s no longer a trick but an art now. People always ask me if I consider magic an art. A trick or an illusion in itself is not art completely, but it’s the manner in which you present it where it becomes very artistic.”

Congratulations to Vinod for emerging in the top 5 of the recently concluded NUS Sparkz competition, held on February 22nd! He has indeed come a long way and his perseverance in pursuing his dreams is an inspiration to us all.

Here’s a little teaser of what Vinod is capable of: